In 1968, Dr. Martin Luther King Jr. was assassinated. So was Robert F. Kennedy. A Viet Cong prisoner was shot in the head by a South Vietnamese security official.

In short, it was not a good year.

Riots broke out in Chicago, as well as Paris. Richard Nixon won the presidency. The Soviets invaded Czechoslovakia.

And the Associated Press stylebook that year was a scant 52 pages and took just two staples to hold it together. This fact has nothing to do with the above historical events; I just wanted you to know how chaotic the world was at the time and how tough it must have been to hold onto any kind of order — even grammatical order — with just a pair of staples.

I want to drink an old-fashioned just looking at this.

Want proof that language changes? Exhibit 1,493,832: The 2011 AP Stylebook is a whopping 472 pages long, spiral bound (unless you’re a cheap skate and bought the perfect-bound copy, which was a couple bucks cheaper) and so thick I was able to write my name in nearly 72-point-tall letters on the bottom edge.

Only one of these has the proper spelling of Chiang Kai-shek.

This is as it should be. Language evolves, and the rules need to change with it.

That may sound like a contradiction: Why have rules for something in a constant state of flux? (If you seriously want to know that then please, I beg you: Don’t have children.)

But Sarah Palin tweets notwithstanding, rules – and rule changes – help us understand one another in writing and speech. And the rules of English are stronger than people think. I’ve been hearing for decades that “whom” is on its way to the linguistic graveyard, yet smart people still use it, and people who want to seem smart still use it incorrectly.

Martin van Buren knew the difference between "who" and "whom." I would hope.

I found the 1968 AP Stylebook amid a shelf of old reference books at work. One night this week, while life on the copy desk was continental-drift slow, I perused the nearly ancient tome to see what rules held up and which ones went out of style like a pair of bell-bottom jeans.

Then there are the changes. You don’t get from 52 pages to 472 without them, you know. 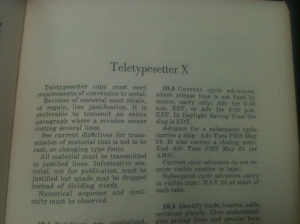 The most notable difference I saw was not in a rule, but in an example. Both editions stress that when it comes to hyphens, avoid ambiguity. But here’s the example the 2011 stylebook provides:

I think you’ll remember the older example better, if only for its vivid imagery:

“The 6-foot man eating shark was killed (the man was).”

“The 6-foot man-eating shark was killed (the shark was).”

This site uses Akismet to reduce spam. Learn how your comment data is processed.